According to The Museum of London, the earliest account of a pipe being used to smoke dried tobacco in England dates back to the 1570s.

Sir Walter Raleigh has been credited with the introduction of the addictive weed to these isles but there is evidence that it was brought here before Raleigh's voyage by Sir John Hawkins in 1565 who probably also brought to us our first potatoes.

Disposable pipes for tobacco smoking were originally completely hand-made until a way of implementing moulds was introduced to speed up production. By the end of the 16th century tobacco smoking had become so popular that pipe-making factories were popping up everywhere – in 1619 there were over 100 clay pipe manufacturing companies in London alone.

Many pipe-making companies included their own mark or personal initials on the pipes. These can sometimes be spotted on the stem or bowl, base or heel.

It is often suggested that the abundance of fragments is due to smokers breaking the pipe when it became clogged. This may be true in a few cases but it's more likely that being as the pipes were so cheap to produce and buy people just threw them sideways when they were clogged or finished and started on a new one. Tavern keepers would sweep up used pipes and throw them into a chest which when full would be emptied, possibly into the Thames. Due to the fragility of the pipes many broke into small fragments and this is why it's so rare to find a complete one these days, especially one that has been tossed around by the strong Thames tides.
. . . . . . . . . . . . . . .

Some of my favourite stretches of foreshore are east of Tower Bridge. A London Interitance has some fantastic information about the wharves and industries that used to occupy the area

It is rare to find a discarded pipe in its complete state these days, however, at Keen's Steakhouse in New York the ceiling of the Lillie Langtry Room is covered in old Dutch churchwarden pipes. Thanks to Vidiot for these images. I particularly like this shot. According to Keen's website, they have the largest collection in the world.
. . . . . . . . . . . . . . .

A lovely coincidence... a C19 pipe-maker called Jane living in Parker Street. She was also from Essex and moved to North London!

The Broseley Pipeworks is an old clay pipe factory in Shropshire that is now a working museum where you can watch demonstrations of how clay pipes were made. And here's some more info about the colours and markings of the pipes from that region.

Shown below is a collection of images showing some interesting bowl and stem fragments I have found along the Thames. More pics here. 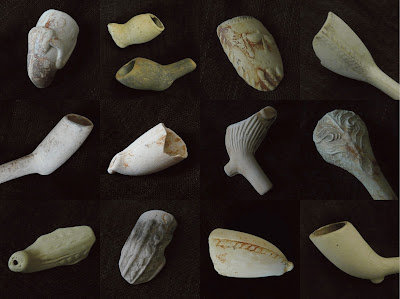 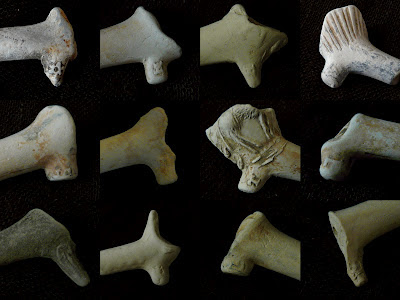 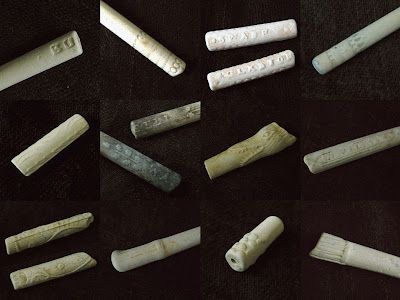